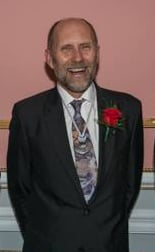 Hilderman Thomas Frank Cram is proud to announce the investiture of Jim Thomas to the College of Fellows of the Canadian Society of Landscape Architects (CSLA). Fellow is the highest honour granted to CSLA members and is in recognition of outstanding contributions to the profession over an extended period of time. Jim’s Fellowship falls under the categories of Executed Works and Service to the Community or the Public. He now joins Garry Hilderman (1982), Heather Cram (2009) and Jeff Frank (2012) as the CSLA Fellows of HTFC.

Alongside Jim, four other CSLA members were inducted: Peter Bigelow, Neil Dawe, Jean Landry and Ted Muller. HTFC extends congratulations to all of the inductees. The investiture ceremony took place on Friday, July 12, 2013 at the CSLA Congress at the Hotel Saskatchewan in Regina.

We are excited for the official opening of the Gim

After months of working remotely from home, it is

As part of Canada Parks week, we want to share our

It was an honour to participate in a sunrise cerem