On October 16, 2012 the City of Winnipeg’s Access Advisory Committee held its annual Winnipeg Accessibility Awards in the Mayor’s Foyer at City Hall. HTFC is proud to announce that Variety Heritage Adventure Park at The Forks and Steinkopf Gardens at the Manitoba Centennial Centre both received awards this year. The awards were presented by Mayor Sam Katz and Chair of the Access Advisory Committee, Councillor Ross Eadie. 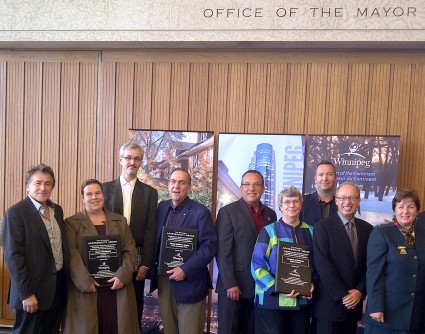 The Variety Heritage Adventure Park at The Forks National Historic Site was completed in 2012. The park is an intergenerational family destination where the rich story of Manitoba comes to life in a physically challenging, socially interactive, and imagination-fuelled outdoor play space. The park is easy to navigate, inclusive and universally accessible to all. Plaques were presented to Parks Canada, Variety the Children’s Charity of Manitoba and HTFC. Monica Giesbrecht accepted on behalf of HTFC.

Construction of Steinkopf Gardens was completed in 2011. The intent of the renovation was to update and refresh the space, which was originally constructed in the late 1960’s, adding life, improving accessibility, and reducing the maintenance burden of the previous design. The many level changes required to accommodate existing utilities and access to the various levels of the Centennial Concert Hall and Manitoba Museum made achieving accessibility a challenging endeavour. Plaques were presented to Manitoba Centennial Centre Corporation and HTFC. Glen Manning accepted on behalf of HTFC.

These are HTFC’s third and fourth Winnipeg Accessibility Awards respectively. Grovesnor School won the award in 2004 and Provencher Bridge Esplanade Riel won in 2005.