HTFC is proud to announce that The Keg Steakhouse & Bar on Garry Street has received a Commerce Design Winnipeg Jury Grand Prize. HTFC were honoured, along with owner Gord Howard, and fellow designers David Goyer Architecture Inc., and Cheryl Watson of Keg International. The awards recognize merchants who call upon qualified design professionals to design and renovate their businesses. The awards were announced at the 2013 State of the City address on Friday, March 8, 2013. HTFC also extends congratulations to all of the businesses and design teams who were awarded a grand prize. There were nine awards handed out in total.

HTFC designed a patio to the south of the restaurant, using materials and forms that complement those of the building, a single-storey warehouse built in 1903 that was originally used by the Hudson’s Bay Company. The patio features brick walls and planters, steel trellises with climbing vines, a fireplace, and a weathering steel water feature.

The public is invited to vote for their favourite of the Jury Grand Prize winners. Those who enter their vote for the People’s Choice Award will be given a chance to win a Spa Getaway for two at the Hotel Fort Garry. Forms are available at the Winnipeg Chamber of Commerce or the Downtown BIZ office. There are also some forms available at the HTFC front desk. The contest is open until June 11, 2013.

A formal award ceremony will take place at a date to be determined. 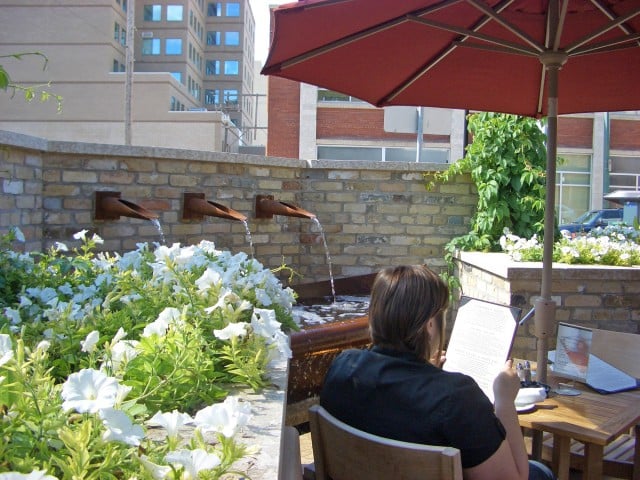